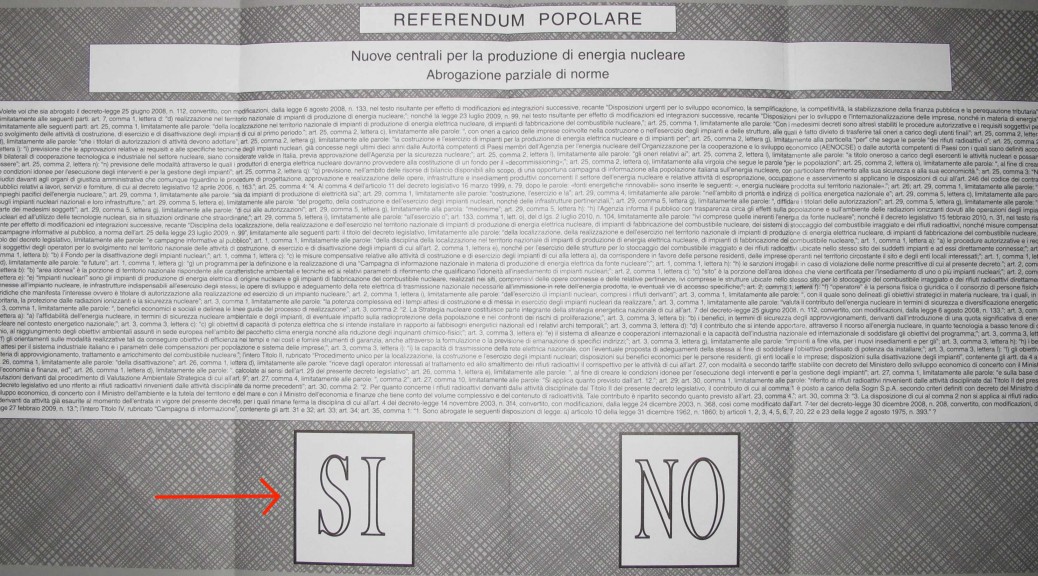 If you want to see an example of what is NOT a democratic country, of what is NOT a Government that thinks about their own people and that ONLY cares about the interest of corrupt politicians, here you have the ballot that, we Italians, have to vote to make the important decision if we want to have Nuclear Power Plants in a seismic country that have almost no infrastructures to deal with catastrophes.

Look at the picture. The text in the middle tells you basically that if you DON’T want Nuclear Plants in Italy you have to vote “YES”. That text is a mumbo jumbo of legal crap that even a lawyer will have a headache to understand. They think this is democracy without common sense. Do they think I have to understand all this crap? Do I have the time and skills to go all through this and understand if I have to vote YES or NO?

Look at the picture and take your own conclusions. (Click to see in full size) 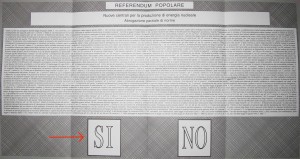 This is a translation of just a small part of that mumbo jumbo.

“Do you want to derogate the Executive Order of June 25th 2008, number 112, modified from the law number 133 of August 6 2088, the resulting text having successive effects of modification and integration, named “Urgent dispositions for the economic development, the simplification, competition, stabilization of the public finances and the equalization of taxes”, only limited to the following parts: article 7, point 1, letter d: “d) the establishment of centrals of nuclear energy into the national territory”; as well as the law number 99 of July 23 2009, of the resultant text as an effect of modifications and successive integrations, named “Dispositions about the energy”, limited only to the following parts: article 25, comma 1, limited to the words: “of the localization into the national territory…”